Born in 1955, Christian Marclay is a pioneer in his field of art.  His style is all about chaos and overlapping anything from noises to images to videos and everything else.  His homage to Hitchcock was a rather interesting addition to his portfolio.

Known as the Death/ Hitchcock the video compilation shows 36 o Hitchcock’s movie killings side by side.

Personally, I think the comparison really shows how consistent Hitchcock is in his directing, while showing how different and creative he can be when designing these filmed deaths.

Nicolas Provost is a belgian filmmaker most known for contemporary short films, however in his piece Gravity, he pays homage to Hitchcock and many other great directors in an overlay compilation of both American and European film’s best kissing sequences. Within this short, two to three kissing scenes are overlaid at a time, the scenes flash between the films to juxtapose the films and even contrast the eras however within the movements of the kisses there is a notable similarity of human interaction within such passionate moments. Provost pay special homage to Hitchcock kissing scenes in particular by including intimate embraces from films like Spellbound, North by Northwest, Notorious, To Catch a Thief and my personal favorite the whirling kiss from Vertigo. Among all the Hitchcock kiss sequences Provost depicts the juxtaposition and similarities through overlays of other famed embraces such as from The Thomas Crown Affair, It’s a Wonderful Life, From Here to Eternity, the beloved 80’s classic Dirty Dancing and of course the iconic Breakfast at Tiffany’s kiss in the pouring rain. There are other inclusions of foreign movies of course from the Belgian cinematographer, however theses were the movies I was able to pick out amongst the flashing cuts of film, If anyone can point out more I’d love to hear about it in the comments. 🙂

The original doesn’t include the goofy 90’s track in the background, but this was the only full version of the piece available on the internet.

Some of the iconic kisses overlaid: 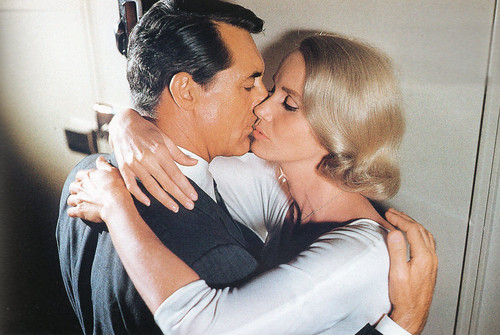 Cindy Bernard is a talented photographer who was been featured in Hitchcock and Contemporary Art by Christine Sprengler. One of her projects, Ask the Dust, is comprised of twenty-one photographs of locations from well-known films released between the fifties and seventies. Bernard traveled to the exact places the films portray and photographed them as they are today. She included some of the works of Hitchcock, as well as other directors.

From North by Northwest, where Thornhill was nearly killed by the crop duster:

From Vertigo, one of Madeline’s attempted suicides:

John Baldessari is a modern conceptual whose more recent works incorporate images and text. The Tetriad Series, created in 1999, is a series of pieces he created by using a four-panel setup of various content. The first three panels contain stills from films or video, sections of artworks by other artists (specifically romantic painter Francisco Goya), and images from life. The final panel contains only text lifted from the works of Portuguese writer Fernando Pessoa. The Tetriad Series was Baldessary’s attempt to combine language and visuals, being a strong believer that language can be a form of art all its own.

Two pieces from The Tetriad Series, What Was Seen and Necessary Facts, both contain stills from Hitchcock’s spy thriller North by Northwest. Both of the lower-right panels are images from the iconic Mount Rushmore scene, when Roger Thornhill and Eve Kendall are being chased by the henchmen of the villainous Vandamm.

However, as I do not have a strong understanding of modern art, I could not tell you the meaning of either of these works or even offer a guess. If someone else would like to give their interpretation, feel free!

This short film by Wago Kreider is directly inspired by Vertigo, as the artist seemed to have chopped up a particular sequence and paralleled it with the present day setting of the film. What the artist seemed to have done was take footage of the set in 2006 and cut that up and matched it with the cut up graveyard scene. This juxtaposition is bizarre but very interesting. The artist has the images fading frequently with each one to two second scene. As a result, there is constant movement in the short film. This in combination with the setting and organ music creates a very dream-like sensation. There is no dialogue further mystifying it. It is as if the point of view was from a perspective of a ghost that has seen this past and present. Another interesting aspect of the short film is the choice to film the modern-day set in broad daylight. In many parts of the graveyard sequence, it is quite dark. This in contrast to the lighter modern day scenes make it seem as if it is fading light to dark, comparing the past and present. In terms of Hitchcock’s filmmaking style, I can’t really find much except for the frequent use of the fade. In addition this film definitely has an eerie element to it but it is not necessarily the same eeriness that Hitchcock usually produces.

The image directly below reveals how extremely overlapped the scenes can get due to the one to two second scenes and the fade in between them. The two sets of images of two, shows the 1958 version of the setting and the 2006 version side by side.

Location proposal #2 was created by the artist Cindy Bernard is based on Alfred Hitchcock’s film, Vertigo. The myth about the Muir Woods is that it was said to have been photographed for Vertigo but it was not. The Woods are featured in Vertigo when the rangers reveals the locations in the woods.

Location Proposal #2 was created by the artist Cindy Bernard is based on Alfred Hitchcock’s film, Vertigo. The myth about the Muir Woods is that it was photographed for Vertigo but it was not for the film. The woods that are featured in Vertigo is when the rangers reveal the locations of the woods.

My assigned contemporary artist is Tracey Snelling. She is famous for her multimedia project exploring a fragmented narrative about a film noir heroine in Woman on the Run. Her exhibit transforms the Street Level Gallery at 21c Museum into another time and place through its video, photography, and 3-D story telling. Snelling takes inspiration through Hitchcock’s methods of creating suspense as well as motifs in some of his films. In her exhibit, it takes place in a motel, very similar to the setting in psycho. The main character, narrator is either a victim or a perpetrator, the audience is not sure until the end of the exhibit; the same thing happens in psycho. Marian Crane steals thousands of dollars, making her a thief and criminal, therefore making her the perpetrator, but after she is brutally murdered she is considered to be the victim. Hitchcock makes the audience wait and see to find out who she is until that scene. In Snelling’s exhibit there are a lot a shadows adding suspense and depth to a scene, also a sense of ambiguity. Snelling uses many more famous Hitchcockian tools in her contemporary art, but those are just a few main points having to do with this specific exhibit.

Pierre Huyghe is a contemporary artist who re-created scenes from movies, usually with the same actors from the original film. Huyghe is a French artist who, in 1995, remade the scenes from Hitchcock’s Rear Window. The film was made in a Parisian suburb with a cast of amateur actors. Huyghe had done similar works with other non Hitchcock films. Remake is a compete scene by scene recreation of Hitchcock’s film; Huyghe intended to compare the two films.