Stan Douglas is an artist who is famously known for reworking films.  He reworked the robbery scene in Hitchcock’s 1964 film, Marnie, in his short film work, Subject to a Film: Marnie.  Douglas in this work did a loop of the scene where Marnie robs the office where she is employed, but he modernizes the set.  For example, he changes out the typewriters with computers.  However, he does make this short film in black and white, instead of color.  The film actually slows down during the action sequences and the loop ends right as Marnie is about to leave which symbolizes that she can never escape her crimes.  In his 1995 review,  Tom Eccles describes the work as “creating the effect of a recurring nightmare” as the character, rather than escaping is “caught in the film loop, forever trapped within the confines of the office.”  The whole work is not online, however there are images of it.

Johan Grimonprez is a Belgian artist and filmmaker whose works often address the effect the media has on our perception of reality. His 2009 film Double Take depicts Alfred Hitchcock, on the set of his 1962 film The Birds, as he inexplicably meets a doppelganger of himself from 1980 the year which Hitchcock died. The two Hitchcocks have a conversation which is marked by a deep paranoia as both are afraid of what the other may do. Primary themes in Double Take include the fear of the unknown/future, as well as the paranoia surrounding the Cold War and the television’s effect on it.

I believe that there are three primary reasons why Grimonprez chose to center his film around Alfred Hitchcock and The Birds. First, The Birds depicted a deadly threat to humanity coming down from the skies, which was a popular way of depicting Communist Russia’s threat to America. Second, The Birds was released in 1962, which was arguably the height of Cold War paranoia, as the Cuban Missile Crisis took place around this time. Third, The Birds was the last great critical and commercial success Hitchcock would have before his career would take a downturn, giving Hitchcock a very good reason to fear his future.

Rea Tajiri’s Hitchcock Trilogy, is composed of three short films based on scenes from Vertigo, Psycho, and Torn Curtain. Tajiri uses the soundtracks by Bernard Herman in each film to cue memories from the famous Hitchcock films. In Hitchcock Trilogy, the sound is separated from the picture, as the soundtracks by Bernard Herman are synced with a different and more minimalistic narrative than the original Hitchcock films. The music of Vertigo, is used in combination with a textual description of three postcards. Music from Psycho is put together with a static shot of these two women and Hermans unused score for Torn Curtain, can be heard while there is a montage showing a consecutive closing of curtains, borrowed from other films.

“On the surface, Rea Tajiri’s work reads like the standard deconstruction of appropriated popular media via text to which we have grown accustomed in the ’80s. But this is a work of remarkable evocation and resonance that counterpoints and complements the scores of Hitchcock films with ‘meta-narrative’ possibilities….In each, Tajiri ‘mirrors the mirror’—she departs from her own subjective perception rather than the original, and creates a new scenario.” —Michael Nash, Reconstructed Realms (Long Beach Museum of Art, 1989)

The first thing that comes into one’s mind when one thinks of “The Birds” is, of course, birds. The entire film revolves around the horror inflicted by the avian creatures upon the human residents of Bodega Bay. Martijn Hendriks, a Dutch artist, decided to find out what “The Birds” would be like with no birds. The result is an ongoing project by the name of, “Give Us Today our Daily Terror,” a digitally-edited version of “The Birds” with every bird painstakingly removed.

The effect is eerie: characters run and scream, chased by nothing. It seems almost as though a mass insanity has descended upon them. With this realization, one begins to wonder: if the birds do not exist, what killed these people? The only possible answer, without delving into the supernatural, is the people themselves.

Attacked by an invisible assailant – or insanity?

Created by Laurent Fiévet in 2007, the most prominent aspect of this piece is a large mound of potatoes stacked so that they partially obscure a television set. This television plays montage in which parts of the film Frenzy is played. These extracts are of Brenda Blaney being unable to escape an armchair from which she cannot escape. 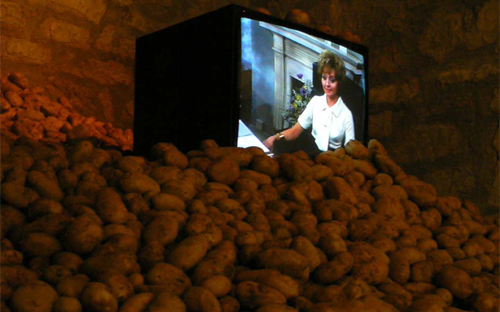 The potatoes and Brenda

Also in the exhibit is a swing that is positioned facing the screen. Visitors are invited to sit on it and even swing. However, should a visitor swing high enough – enough to be over the television set – the set switches scenes to a different montage. Extracts of pivotal and violent scenes from the film are presented and then introduced with a voice from the set with the word “lovely.” This is repeated multiple times, each time with different voice inflections to fit the scene. However, since these scenes are often visceral in nature, the voice tends to become increasingly aggressive. 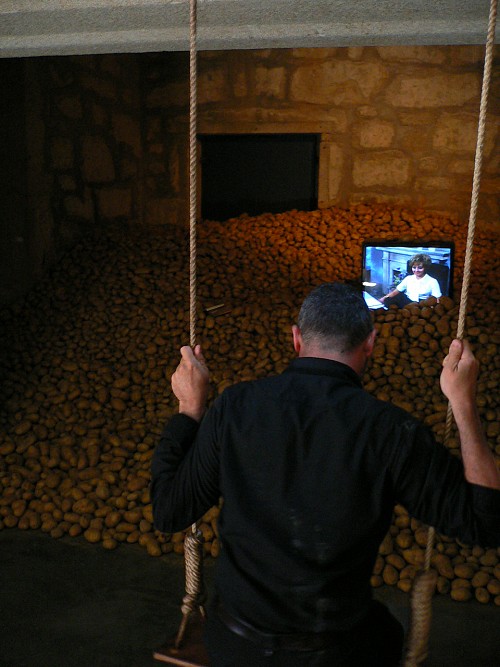 The swing with a view of the initial screen

By having the exhibit be interactive, Fiévet is essentially putting visitors into the role of Robert Rusk, the necktie killer. The potatoes are a reference to Babs and how her body ended up in the bed of a potato truck. By having them partially obscure the screen, the piece reminds the visitor of the way Babs was hidden by something so mundane as a potato and that Rusk (or rather, the visitor) is so detached so as to liken a human to nothing but a vegetable.

Indeed, the visitor is sure to be unnerved, but when one activates the second montage, the identification with Rusk is pushed further. The swing takes effort to get over the screen, simulating the effort required to rape and murder Brenda. In addition, when the visitor has reached the peak of the swing, he or she is now over Brenda, highly symbolic of the relationship that Rusk feels he has with women as a whole. This furthers the identification with Rusk and is designed to make the visitor feel uncomfortable and unsettled.

Similarly, Hitchcock loved to unnerve his viewers and play with the concept of voyeurism. In this piece, Fiévet has taken the opposite approach and does not allow the audience to be merely a spectator, but rather, a participant in the act.

Alex Prager, born November 1, 1979, is an American filmmaker and photographer who draws inspiration from Hitchcock’s works with many references to The Birds (1963).
Among the photographs she produced inspired by the film include a collection of photos she shot for W Magazine entitled “Spellbound.”

Prager also took a series of photos for an advertisement with Bogetta Veneta in 2011 that also pulls inspiration from Hitchcock’s film.

In addition to these, Prager also has an image in her own collection, The Big Valley (2008) entitled “Eve”

The inspiration is obvious in each of the photos.  The birds loom ominously and swoop similar to Hitchcock’s film.  They seem similar to the original film, obvious to our eyes that the birds were edited in after the photos were taken.  The women depicted are dressed in retro styled clothing with hair and makeup to match, with the exception of the Bogetta Veneta set.  The woman depicted in “Eve” is even wearing an ensemble similar to Tippy Hedren’s eau de nil green outfit from The Birds.

Victor Burgin’s The Bridge was made in 1984 it is a painting featuring the Golden Gate Bridge and a dead/dying girl.  It references Sir John Everett Millais’ Ophelia but more importantly for this course, Alfred Hitchcock’s Vertigo.  The Bridge is a painting that resembles the scene where Madeleine tries to kill herself by the Golden Gate Bridge. We also see the resemblance of Madeleine in the water to the girl in the painting.