Hitchcock’s film Marnie from 1964 was criticized at the time of its release as being a poorly made picture however, the cinematographic style represents numerous themes that Hitchcock tried to display.  This paper argues that the cinematography, narrative themes, and artistic purpose reveal the true meaning behind this film while also showing a connection to society through the dynamics of each character.  The film contains motifs that Hitchcock has continued to use in other films such as the use of color as a symbol.  Exploring the red suffusions in the screen and the painted backdrops that Hitchcock uses will reveal the purpose behind the film.  The film Marnie is now praised for the subtle Hitchcockian themes and obvious clumsy technique that displays Marnie’s character artistically.  Hitchcock incorporates many motifs in the film such as the familiar driving scenes, wide shots, close-ups, and musical compositions that hurt your ears while also adding old techniques to enhance the unrealistic nature of Marnie’s perspective.  The paper will also go into Hitchcock’s purpose behind creating a film that develops the characters through their interactions while also spanning the relative time in the movie to represent a whole week.  The paper concentrates on the characters and Hitchcock’s artistic purpose in the film to display connections in society.

Cindy Sherman displays the expressions of multiple females through her work from the 1980s and she states that much of her influence comes from the movies that were pictured during the 1940s or 50s.  As well as expressing dramatic emotions through her work Sherman uses shadows and vantage points to illustrate her work.  The effect that the shadows mixed with the close ups and expressions of various women adds to the mysterious loom that Hitchcock accomplished through his films.

Here is an example of a piece of art which seems to directly relate to one of Hitchcock Presents episodes; The Slaughter of the Lamb:

Thinking back to the episode the style and surroundings in the photograph really do impersonate Hitchcock’s style.  Another good photo of Cindy Sherman resembles the opening scene in Marnie taking place next to a highway with a woman holding a bag.

Sherman uses similar techniques that Hitchcock used in his films to capture mysterious situations.  Looking at her other work during the 1980s you can see the similar themes that Hitchcock achieved through his films.  Sherman however, is making fun of the cinematic culture in some ways but still resembling Hitchcock in his ironic humor.

Here is a photo that emphasize expression, shadow, and mystery:

During the release of Hitchcock’s Vertigo, in 1958, the film was not regarded as one of his best.  This was mainly because the audience and critics of the time could not get past its literal meaning and deeper delving into the subconscious of Hitchcock’s mind.  Many articles have described Hitchcock as a director who was ahead of his time and they were referring to the 21st-century characteristics that Hitchcock portrayed without knowing what they would become.  Anyway, Vertigo is now one of Hitchcock’s most popular films because scholars have done a lot more research and analysis of the film’s themes or meanings.  Penelope Houston describes Vertigo as “one of the two or three best films Hitchcock ever made, [it]is the most confessional, dealing directly with the themes that controlled his art,” in her article “Vertigo” from Sight and Sound. Vertigo speaks more to today’s Hitchcockian audience with what has already been studied about his motifs and stories from his past.  Scottie resembles Hitchcock with his controlling and obsessive attitudes towards directing while Novak portrays one of the best Hitchcock blondes.  Another aspect of the film’s difference has to do with its focus on simple but important shots like the scene by scene takes of Scottie following Madeline.  Altogether the film has its beauty and it doesn’t even have a happy ending.  Hitchcock does a great job in representing the characters as two people that we can root for at different times during the film.  The shock that Vertigo has instilled into the audiences of two centuries says a lot about the greatness of the film. 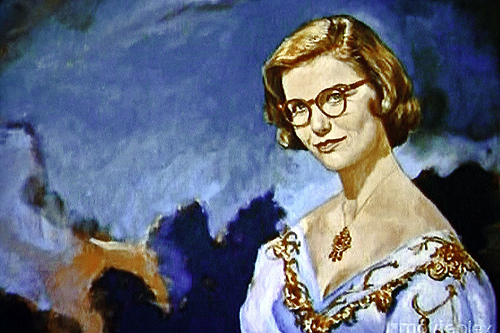 The Painting by Barbara Bel Geddes in Vertigo

Shadow of a Doubt was a piece that Hitchcock took his time on, carefully composing the structure and plot of the film as needed, with the collaboration of Thornton Wilder. The novel that this film was based on already had a psychological background but the addition of Hitchcock’s conscious and subconscious qualities made the film into an interesting depiction of ‘the perfect American family’. Of course the family is anything but perfect especially if you want to take Uncle Charlie’s perspective on life. Uncle Charlie represents many trends of the time in which Hitchcock made his film. Being an imitation of the psychopathic ‘Merry Widow Murderer’[1] Uncle Charlie twists the plot of ‘the perfect American family household’. However, Hitchcock would never let his star character slide with only one juicy and controversial quality. In Shadow of a Doubt there is no doubt that a tinge of incest can be detected between Young Charlie and Uncle Charlie. Watching them as their proximities are closer than that of a family relationship, Charlie and Uncle Charlie make the audience a bit uneasy as their interaction in the beginning of the film is too close for the audience’s comfort. All these dysfunctional characteristics are slowly disclosed in the film as a way for Hitchcock to speak out against the popular and possibly horrid icon of what a family should be. As McLaughlin describes the horror of this film, “The representative American family, in short, is the true horror of the film”[2].

There are also many theories on Hitchcock’s films that state how he incorporates autobiographical information in his films. Some theories many even say watching Hitchcock’s films that depict family interactions are a reflection of his family as he remembered them as a child. According to Professor Landon’s analysis of the film, at the University of Maryland, Hitchcock wrote a small part of the script which was reportedly an incident that occurred in his own childhood. It stated, “There was no holding him. It was just as though all the rest he had was too much and he had to get into mischief to blow off steam”1. This is the part of the film when Emma, the mother, describes Uncle Charlie’s bicycle accident as something that changed his life forever. The theory could be true but another interesting aspect of Shadow of a Doubt is Emma, a supposedly mild character of the film but Landon expresses her as a reflection of Hitchcock’s own mother being that she has the same name. Hitchcock has a knack when it comes to incorporating himself in his films whether it be physically with his cameos or subconsciously through his characters. In Shadow of a Doubt Hitchcock challenges the superficial image of ‘the perfect American family’ through the use of Gordon McDonnell’s novel with a psychological twist.

Hitchcock has a way with impressions, instead of words. He manipulates the audience’s perception of many of his characters which allows the audience to look at themselves for an instance and to then reflect on their judgments. Hitchcock expresses the “man as a complex of innocence and evil” (p. 26 A Hitchcock Reader) which can be seen in both his works The Lodger and Blackmail. In The Lodger, Ivor Novello, takes on a vampire like persona with his long draped clothes and his covered pale face adding to the audience’s suspicion from the moment he stands at the entrance of the Bunting’s household, long and lanky. Hitchcock has purpose in all he does, the minute details do matter and it is shown through his process of making films. He starts with a story board and throughout the compilation the main focus is portraying certain themes or motifs that manipulate a thought through art. The Lodger is suspected of being The Avenger because Hitchcock purposely give him the attributes which would without a doubt frame him as The Avenger but that would satisfy the audience all too well. Hitchcock leaves his audience in disbelief when they have to take into account that The Lodger is not in fact the serial killer but instead a noble brother looking to avenge The Avenger and Hitchcock follows with this theme in Blackmail.

However, in Blackmail the one who is guilty [Alice] is thought to be innocent by the police. The real villain, the Artist in Blackmail has a gentle type character with admirable qualities yet his intentions are anything but gentle. After the murder scene everything changes for Alice and Frank, they are left with the guilt of knowing how The Artist died. Hitchcock likes to be ironic; to twist the roles and pose a change in the plot of a story because that is what keeps you on your toes.

Here are some gifs that represent Hitchcock’s portrayals of innocent or guilty characters: