This piece of contemporary art is a short film in which Lewis explored rear projection, a technique in which actors stand in front of a screen onto which background footage originally shot outside is projected. The film looks as if it was shot in an outdoor ice rink, however it was actually filmed inside a theater. Hitchcock’s Saboteur (1942) seems to have influenced this piece of artwork. In this film, as in Lewis’s work, rear projection was used. In Saboteur, it was used in the scene in which Pat Lane and Barry Kane are dancing in the ball room. In both of the film and the short film, this technique wasn’t necessary; however, it was used purely for aesthetic purposes. It is beneficial because it’s used to isolate the two main characters from the rest of the crowd, putting an emphasis on their relationship.

Alfred Hitchcock’s Saboteur was one of the first films he made in America. The 1940s brought about much change for Americans with the onset of World War II in 1939 and America’s entrance into the war following the bombing of Pearl Harbor. This paper argues that in this film, Hitchcock attempts to endorse the Allied war effort in America through the use of propaganda; he does this specifically through the themes, motifs, characterization, and the plot, which are examined in this paper. Gustianis and DeSilva’s analysis of the importance of narrative films to the history of war propaganda serves as a good starting point for my paper; they argue that narrative films are just as important, if not more important than documentaries. The paper examines how important the plot was in drawing its’ audiences in and how it enabled them to root for the protagonist and against the saboteurs. In conclusion, this paper argues that Hitchcock took advantage of Americans being drawn to films like Saboteur during this period and his incentives for making it were a mix of him wanting personal success and attempting to pull Americans into the war.

While The British Film Institute ranked Vertigo as being the best film of all time, I had a different opinion. My opinion was similar to those that were published in 1958 after the release of the film in that I felt indifferently about it, and it really didn’t have much of an impact on me, or on many of my classmates it seems. The New York Times review of Vertigo didn’t offer much praise and described it as a typical Hitchcock melodrama, performed in the exact way you would expect a Hitchcock film to be (Crowther). If this film truly deserved to be ranked at the top, I feel as if it would have been necessary to have something new and uncommon for Hitchcock that would have made it unique. Overall, I found the film to be rather depressing with very few uplifting scenes- mainly ones with Midge who isn’t even present for most of the film. The relationship between Scottie and Judy was especially sad, and I even found it hard to watch. Despite Scottie having gone through the things he went through, I still find him unsympathetic. His behavior towards Judy was very cruel, and he barely even acknowledged her existence until she transformed to be an exact copy of Madeline. Scottie would barely even touch Judy until every last detail of the transformation was correct. Furthermore, it was very heartbreaking that Judy would have agreed to anything to get Scottie to love her back; she even asked him at one point if he would love her if she did everything be insisted upon. Finally, I thought the ending was rushed and upsetting. In my opinion, she jumped because she knew that either she live her life with someone who would never love her or end it at that moment. The fact that she believed she had no better options ended the movie on a depressing note. 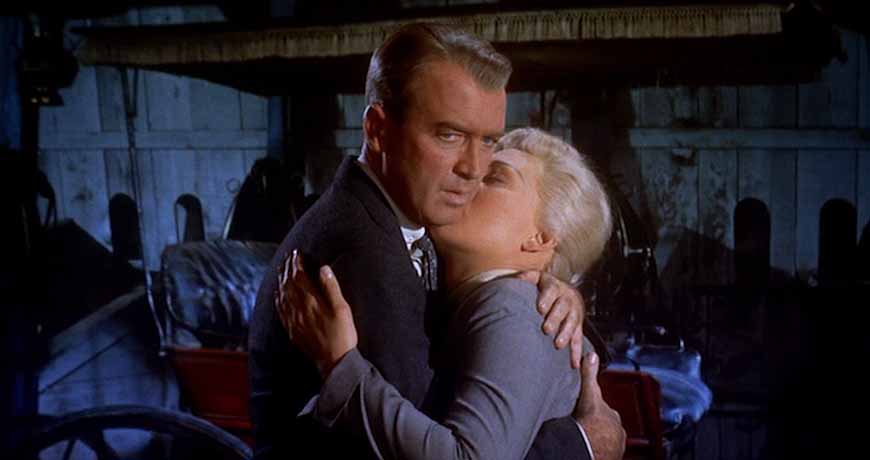 This picture captures Judy and Scottie’s relationship; she is helplessly trying to do anything to get him to love her while the past still consumes him.

In Alfred Hitchcock’s Shadow of a Doubt, he makes an interesting comment on the dynamic of the family. Hitchcock depicts the average family as being more complex than one might think. McLaughlin’s essay “All in the Family” makes a valid point to back up this argument; “The façade of the Newton family home in Shadow of a Doubt is composed of sweetness and sunshine; behind it, however, lies, in the words of Uncle Charlie, ‘a foul sty’ (145).” On the outside the Newton family looks rather normal; there are three kids, a mother and father who both work normal jobs to support the family, and they live in an average-sized typical American home. Mrs. Newton’s actions demonstrate that she is trying to prove to the outside world that this is the case, especially when the detectives come into the home. Charlie’s classmates are in awe over Uncle Charlie, and see a perfect uncle-niece relationship. However, once we get to see what is really going on within the family, we see how strange and abnormal the relationship is between these two characters. Charlie and her Uncle’s behavior appears to be very intimate with a lot of touching, and they believe that they have a much deeper connection than just an uncle and niece. In addition, Uncle Charlie gives Charlie a ring in a manner that looks like he is proposing to her in order to establish control over her. Beneath the perfect looking family, there is one especially strong, unsettling relationship taking place.

McLaughlin, James. “All in the Family: Alfred Hitchcock’s Shadow of a Doubt.” In A Hitchcock Reader, 145-155. Second ed. Blackwell Publishing, 2009.

The staircase looms in the background as the lodger enters the house.

One of the important themes present in Hitchcock’s early films The Lodger and Blackmail that will define Hitchcockian style throughout his career is the presence of a staircase. A staircase in a Hitchcock film not only takes the actors to a new place, but it also may transport viewers to fears, dangers, and a feeling of self-awareness.

In The Lodger, the stairs are used to represent the distinction between social classes and how it is difficult to move between them if one is not destined to do so. Right when the lodger enters the house, he goes straight up the stairs and doesn’t spend much time downstairs throughout the entirety of the film. The lower level of the house where Daisy’s parents, Daisy, and Joe spend most of their time, represents the middle class; whereas, the upper level where the lodger resides signifies the upper class. The difference between Daisy and the other middle class characters in the film is that Daisy is very comfortable being upstairs in comparison to the others who clearly are not. This tells us that Daisy belongs in the upper class with the lodger. At the end of the film when Daisy and the lodger are embracing at his home, the staircase is in the background, showing that Daisy will soon make her ascent into the upper class.

In Blackmail the staircase in the artist’s apartment takes Alice from a place she is familiar with and knows well to a new and risky one. Once Alice is upstairs, she is really alone with the artist, a man she doesn’t know well, for the first time. The stairs bring her up to this scenario and isolate these two from the outside world, even the police patrolling the streets don’t seem to notice them. Alice is lured upstairs because she thinks she wants to experience the unknown, but really she is quite naïve and doesn’t understand what that will entail. Stairs transporting characters to an unknown place is a theme that will continue to show up in Hitchcock films.