Lifeboat itself was seen as controversial due to accusations that the movie was anti-American and fascist, however as controversial as Lifeboat was at the time, Hitchcock was only trying to make a statement towards the American interaction with the war like he had done in pre-war and other wartime films. John Steinbeck, the writer of the original story, critics, and audiences viewed Lifeboat controversial because of the themes they held. However, they all seemed to have missed the themes that Hitchcock was actually trying to present to audiences. Hitchcock had been extremely involved with wartime efforts, especially when it involved England. Having been born and raised in England, Hitchcock’s heart still laid there with home country. Hitchcock had created three propaganda films over in Europe during the war even though his life was at risk. Also, Hitchcock had made other films during the course of the war. The film Saboteur started filming before America entered the war, and critics have seen underlying hints towards motivating America to enter the war to help. Having multiple films made by Hitchcock that support the war against Germany contradict the accusations against Lifeboat that claim that it is a fascist film.

Laurent Fiévet created two pieces of art that include work from Hitchcock himself. One titled Lovely Memories and the other Scream. ‘Scream’ was released in 2003. The point of both works is to be interactive.

In Scream There is a hall with two telephone booths at the end of the hall. They are illuminated only by a dim neon light. One of telephones will ring. When you pick up the phone off the receiver the projection begins. Four projectors will being playing dark clips from Hitchcock’s film The Birds. The idea of the work is to imprison the visitor within the image itself.

With Scream it reflects on both on Edvard Munch’s painting The Scream and Hitchcock’s work The Birds, which was also based on Munch’s painting. As the title has suggested, this installation also refers to the film Scream created by Wes Craven, where the victims summon the presence of the assassin when answering the telephone. The spectator walks down the dark narrow hall towards the two phone booths. Here is one of the images shown 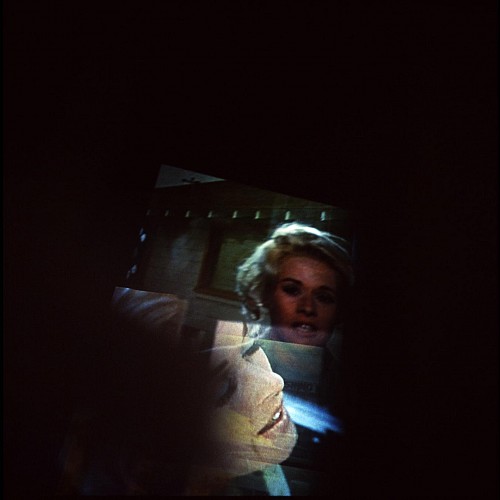 A dark room contains a large pile of potatoes. In the pile of potatoes, there is an old television set sticking out. The screen shows montage in which an extract from Frenzy, which shows Brenda Blaney struggling to free herself from an armchair which continually sucks her in, refusing to let go. The spectator sees a swing that hangs from the ceiling. It is facing the television set and the spectator is invited to either sit and watch or swing over the potatoes. If the spectator decides to swing and they reach a certain height, Brenda disappears from the screen. She is replaced by other images from Frenzy and a voice can be heard from the TV. The voice repeats the word “Lovely” in different tones, mostly aggressive. Hidden in the potatoes, with the TV, there is a web cam that captures the reactions of those swinging.

Although we know that Frenzy is a Hitchcock film, the key motif of this piece is that of the potatoes. The potatoes references to the film where Rusk, the expert neck-tie strangler, tries to recover the tie pin that threatens to reveal his identity to the police which is hidden in a lorry full of potatoes. The pin is found clutched in the fingers of Babs, whose corpse was hidden in the potatoes. Here is what the spectator will see as they enter a room. A lone rope swing facing a television set partially hidden by the pile of potatoes The spectator is encouraged to sit and view the screen from the swing. From what I have found on these two works I feel that they are both heavily influenced by Hitchcockian motifs. The motifs are are easier to see with Lovely Memories because of the blatant use of the potatoes which was a key factor in Hitchcock’s film Frenzy. With Scream there are more works that Fiévet pulls from. From Hitchcock he really pulls on the fear that is felt with The Birds not only with the imagery which happens to be from the birds, but the anxiety people have when choosing whether or not to answer the phone. If they answer they set off the projections. Fiévet likes to pull his spectators into the work so they can be a part of it. It’s more than something that you look at, you can interact and change what happens depending on what you choose to do.

I feel that Fiévet’s work is a combination of appropriation of Hitchcock images as a tool to evoke feeling but he also uses the motifs of the the two films to make a statement. I’m unsure if the motifs are used to show a fetish but I feel it reflects more on the “possessive” spectator. This is especially apparent to me because a lot of what happens is up to the spectators. They can chose to just sit on the swing or swing. They can chose to pick up the telephone and set the projection in motion. He puts the choice in the spectators’ hands giving them the control. The spectators possess the power to choose what occurs.

There is one animated television show that I know has multiple Hitchcock references. I have been watching The Simpsons since I was very little and I never realized how much Hitchcock culture I was being introduced to, until this year. After watching movies like Strangers on a Train, Psycho, Rear Window, The Birds, Spellbound, and many more of Hitchcock’s works. When watching Strangers on a Train I caught the reference from The Simpsons when the statement “criss cross” came into play. It automatically reminded me of Bart Simpson saying “Criss cross” to his sister Lisa.

Hitchcock’s cameo in the Simpsons episode Treehouse of Horror XX

And to see a list of other Simpsons episodes that contain Hitchcock references and or specific films that the Simpsons reference to: http://www.hitchcockwiki.com/wiki/Category:Hitchcock_references_in_The_Simpsons

Another popular animated TV show that makes references to a Hitchcock film is Family Guy. There is actually an episode that is a spinoff of North by Northwest. It copies a lot of the visual shots from the film and even the title is “North by North Quahog”

Here are some of the images that match the original film: for more about this episode: http://www.hitchcockwiki.com/wiki/Family_Guy:_North_by_North_Quahog

For  even more homages outside of the animated TV series: http://www.hitchcockwiki.com/wiki/Spoofs,_Parodies_and_Homages_of_Hitchcock_Films

Bonus: I really enjoyed this Simpsons episode where Bart is stuck in a cast, like LB Jefferies in Rear Window. Bart breaks his leg at the peak of summer and is stuck in bed while everyone else plays in the new Simpson pool. To keep himself occupied he uses his sister’s telescope to take a look around Springfield. We even catch a glimpse of Jefferies himself! All images and links thanks to The Alfred Hitchcock Wiki

In my opinion, Vertigo is not one of my favorite Hitchcock movies. Out of all the movies we have seen so far, I don’t think Vertigo would even make my list of favorite movies from Hitchcock. To me, Vertigo took way too long to get into the story and by the time we get into the story interest is gone. According to Variety’s review of Vertigo “Unfortunately, even that mastery is not enough to overcome one major fault, for the plain fact is that the film’s first half is too slow and too long.” I have to admit that Hitchcock, much like his other movies, used a lot of visual imagery in Vertigo, but it just wasn’t enough to get the movie along. I was so bored through the movie and yes it did have some suspenseful parts but it was like there was suspense and then it was back to its long drawn out story. There are certain visual aspects that I feel could have led towards Vertigo’s high place in top films but not as high as it got. Vertigo is such a boring movie that it I feel that one of Hitchcock’s movies should be more popular. For me Psycho is ranked higher than Vertigo. Psycho had developed a story and kept the story going at a consistent and decent speed that kept me interested.

This is the intro to Vertigo. It confused me and at first seeing it I felt that movie was going to be intense and interesting. However, as the intro moved on the less interested I became.

Shadow of a Doubt gif of young Charlie (Teresa Wright) walking down stairs wearing the ring her Uncle Charlie gave her. (Which he had taken and she has now taken back into her possession.) From maudit’s tumblr.

Hitchcock has a tendency to use Jewelry in a way to show female beauty, male power, and greed. I feel that in Shadow of a Doubt  and To Catch a Thief that Hitchcock is using jewelry to show the lack of power the man holds of the female and the temptation that the jewelry holds.

Hitchcock uses jewelry to show many different things. In the first gif (of Charlie’s hand as she walks down the stairs) Hitchcock is using it to demonstrate male power, or lack there of. I feel that Hitchcock is using this to show how young Charlie now holds power over Uncle Charlie with this ring. She now holds the evidence she needs to prove that Uncle Charlie is the “Merry Widow Murderer.”  Before young Charlie finds out about the ring we believe that Uncle Charlie had all this money and nice things because of his mysterious job. Afterwards, she figures out where the ring truly came from. Uncle Charlie has made it clear to the audience at a point that he feels that women living off their dead husbands’ money is a waste. He hates the widows who clearly flaunt their money and spend it on ‘trivial things.’ (One thing being jewelry)

I also feel in this that Frances, like young Charlie, is trying to use jewelry to hold power over a male character, John Robie. In Shadow of a Doubt young Charlie is using that ring to basically tell her uncle the gig is up, that she knows and now she has the proof she needs. He can no longer use his ‘power’ over her. Here in To Catch a Thief, up until this point jewelry has been used to show the status of the women who are stolen from. All the women are upper-class women who can afford expensive jewelry which attracts the thief to go after next.

In both of these movies I believe that Hitchcock is using the jewelry to show how women use jewelry to not only look beautiful but to show how much money the have in their possession, which can lead to their downfall. I also feel that Hitchcock is not only using the jewelry as an identifier of wealth but as a temptation as well. In Shadow of a Doubt, young Charlie is tempting her uncle to challenge her. She in this scene holds all the cards and dares him to try and stop her with all these people around. In, To Catch a Thief  Frances is on to John Robie, “the Cat” and wants him to try and steal from her. She knows who he is and is tempting his “inner thief” with an expensive necklace. These women are holding power, as little as it may be, over the male character in these two scenes (Uncle Charlie and John Robie). Young Charlie holds enough power to ‘convince’ her uncle to leave town, which eventually leads to his death at the end.