There are some terrible movies that can only be described as an experience. You might sit and laugh at the horrible acting and effects, or maybe sit with your head in your hands wondering how humanity created such a bad film. These were the reactions when my friends and I watched Birdemic: Shock and Terror (2010). Inspired by Hitchcock’s The Birds, Birdemic features the best acting, graphics, and audio that a $10,000 budget can apparently buy (which isn’t much, evidently). The film focuses on environmentalism and the dangers of global warming, as director James Nguyen stated he was inspired by Al Gore as well as Hitchcock.

The trailer for the film really says it all:

With 1.8 stars on IMDb, I’d recommend this film to anyone who enjoys watching bad movies for fun.

Released in 1959, North by Northwest is a film about an advertising executive, Roger Thornhill (played by Cary Grant), who is mistaken for a U.S. spy. This causes him to nearly be killed on a number of occasions by enemy spies led by Phillip Vandamm (James Mason). This paper discusses the theatrical themes found in North by Northwest, especially the “play within a play” motif. This paper also explores the importance of Cary Grant as its star. It discusses the true identity of George Kaplan, the spy Thornhill is mistaken for. Importantly, this paper also discusses the host of roles Thornhill assumes in his attempt to survive, clear his name, and save the spy he has fallen for, Eve Kendall (played by Eva Marie Saint). This paper cites the work of scholars such as Stanley Cavell and Robin Wood, whose textbooks are used in this class, as well as other Hitchcock analyzers like Leslie Brill and Richard Allen. North by Northwest, containing famous scenes such as the “crop duster sequence” and the “Mount Rushmore descent,” is considered one of Hitchcock’s greatest films, and this paper offers a view as to what makes it so great.

Cindy Bernard is a talented photographer who was been featured in Hitchcock and Contemporary Art by Christine Sprengler. One of her projects, Ask the Dust, is comprised of twenty-one photographs of locations from well-known films released between the fifties and seventies. Bernard traveled to the exact places the films portray and photographed them as they are today. She included some of the works of Hitchcock, as well as other directors.

From North by Northwest, where Thornhill was nearly killed by the crop duster:

From Vertigo, one of Madeline’s attempted suicides:

Vertigo deserves the top spot on the British Film Institute’s list of the 50 Greatest Films of All Time because of how it draws in its audience. The moving camera shots used to showcase Scottie’s acrophobia can make viewers experience some degree of vertigo themselves. The viewers see–experience–Scottie’s strange, surreal dream and are weirded out by it like he is (though not enough to land them in a mental hospital like Scottie). When he wakes up, he stares directly into the camera, as if to acknowledge the audience. When Scottie controls Judy, making her change into Madeline, the audience feels as uncomfortable as she does. Finally, Vertigo ends abruptly after Judy’s real death: Hitchcock intended to leave the audience in stunned silence, just as he left Scottie. Few films can effectively force audience participation like this, really making viewers feel the way the characters feel. Therefore, Vertigo deserves its current rating as the Greatest Film of All Time.

The famous staircase shot. We don’t just see what Scottie sees, we can also experience his dizziness.

Partway through Strangers on a Train, I realized Hitchcock had intended for his villain to be gay. I realized that Bruno was displaying traits As Robin Wood states, according to “heterosexist mythology: one is probably gay if one shows traces of effeminacy, had a close relationship with one’s mother, or hates and murders women.” (Wood 336) The second of these traits was most obvious for Bruno. He wore ties with his name embroidered on them to please his mother, whether she knew he was wearing them or not. In the first scene that his mother is in, she has just finished giving him a manicure, which comes across as feminine and intimate. Bruno also seems to have an Oedipus complex: attraction to his mother and hatred for his father. 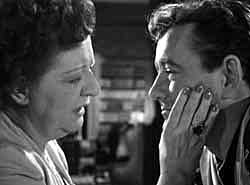 The first scene with Bruno and his mother. In this shot, Hitchcock positions them as he would a couple.

However, due to censorship of the time, Hitchcock could not have an openly gay character in the film. Instead, he leaves “clues” for the audience to pick up on so they may figure out his intentions. What this means is that if a viewer is able to realize Bruno’s homosexuality, he or she has just done simple psychoanalysis of a character. As this film followed Spellbound, a film with obvious basis in Freud’s theories, fans likely would have started analyzing friends and characters on their own. One could argue that Hitchcock trusted his fans to be able to see the clues he was leaving for them in Bruno’s behavior.

In many of his films, Hitchcock has the police as antagonists, getting in the way of the heroes of the movie. This likely comes from the story that Hitchcock was allegedly locked in a jail cell when he was young. The police are often portrayed in a negative light, such as in The Lodger when Joe and his men arrest the title character. Even though the audience has every reason to believe the Lodger is guilty (he has just been found with a gun and a map with the location of the murders marked), most people still sympathize with him and Daisy and do not want him to be taken away; thus, the police are seen as wicked for doing their job.

Similarly, the opening scene of Blackmail features police in the shadows as they are about to arrest a man. Again, they’re only doing their job, but Hitchcock manipulates the lighting to make them appear sinister. These do not look like your friendly neighborhood constables.

Hitchcock would continue the theme of antagonistic police (primarily in the form of police wrongly chasing an innocent man) throughout his career as a director, in films such as The 39 Steps and North by Northwest.