Hitchcock’s legend (and his profile silhouette) live on today via his films, story books, and television series. In fact, his unique personality has been lovingly recreated and used in some unexpected ways. Whether it is a remake of one of his classics, or an imitation of one of his films as a cartoon, Hitchcock is still in the public eye as an easily recognizable cult figure.

As a child I used to watch Arthur episodes, and one of my favorites was “The Squirrels”, which was based on Hitchcock’s “The Birds”. At one point in the episode when the kids are watching “The Squirrels” on television, squirrels gather and take over the jungle gym at the playground, just as the birds did in Hitchcock’s film. [youtube]https://www.youtube.com/watch?v=OiXJyoKwWUI[/youtube]

Hitchcock’s famous persona was also used in the 1960’s hit animated series, “The Flintstones”. The character in one of the episode utters the famous “Good Evening” greeting in the same long, drawn out manner of speech he used, and is patterned directly on his seemingly ominous and suspenseful character. In real life he was somewhat of a practical joker and would undoubtedly have wholeheartedly appreciated his having been made “immortal” by such a popular television series. 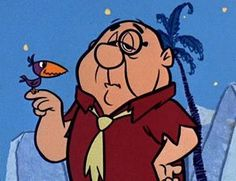 1 thought on “Hitchcock in Today’s World”