Almost all relationships depicted in Hitchcock’s films involve some conflict whether it is between two men (Strangers on a Train) or a man and woman (Rear Window and Vertigo). One concept that frequently occurs regarding conflict is the changing of a leading lady for their man.

Most prominently seen in Vertigo, Scottie Ferguson is determined to reincarnate his lost love by altering the physical appearance of Judy.  By changing everything about her, Hitchcock appears to be supporting the idea of women changing for men, which can easily be debated in current society.  Hitchcock makes Judy appear more as an object than a person, as Scottie is only attracted to her external appearance. 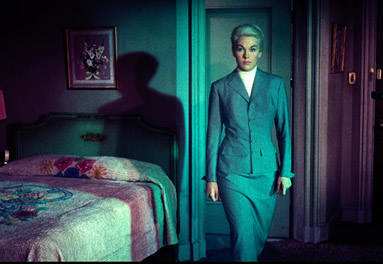 Rear Window also highlights a woman’s willingness to please the man she loves, as Lisa Fremont eventually changes her interests to fit those of L.B. Jefferies.  Both essays by Keane and Mulvey raise the question of whether men are fulfilling their visions or their fetish, to which I think it is both.  Although one case is stronger than the other, both men have a form of obsessiveness with their women and subconsciously influence them to fit their ideal type.

As seen in 39 Steps, the only attribute Pamela changes is her opinion of Hannay as she realizes his innocence.  This is a prime example of an icy blonde changing for the better, which not many of Hitchcock’s leading ladies do.  A woman should never change for anyone but herself and changing for a man depicts low self esteem.

1 thought on “Changing for the better?”